Vivian Xu working at the Max Planck Institute for the History of Science, photo by Lisa Onaga

Vivian Xu is a media artist and researcher based in Shanghai. Her work is situated between bio and electronic media in creating new forms of machine logic, life and sensory systems, and often takes the form of object, installation or wearable. In The Silkworm Project Vivian Xu explores the possibilities of using silkworms to design a series of hybrid machines capable of producing self-organised 2D and 3D silk structures. Xu wants to understand how far the behaviour of insects can serve as a foundation for technological design. To this end she has developed cybernetic devices based on both biological and computer-controlled logic. The artist-designer works on the creation of self-organised silk structures designed by live silkworms, a posthuman machine.

Our collaboration with Vivian Xu has already started in 2015. Her project The Silkworm Project is closely tied to our series “Nonhuman Subjectivities” (2016/17) and “Nonhuman Agents” (2017/18). We appreciate Vivian Xu’s contribution at our conference “Nonhuman Agents in Art, Culture and Theory” (Nov 2017, Art Laboratory Berlin), which we published as a video recording (along with all other conference contributions) in our web archive (see here). We are pleased to collaborate with the Berlin-based Max Planck Institute for the History of Science (MPIWG) on a four-month artistic research residency in Berlin by Vivian Xu (May-August 2019). The exhibition, talks, a symposium, and a workshop on sericulture by Vivian Xu will provide the public with insights into this fascinating long-term project.

Art Laboratory Berlin is happy to exhibit Xu’s projects for the first time in Europe. 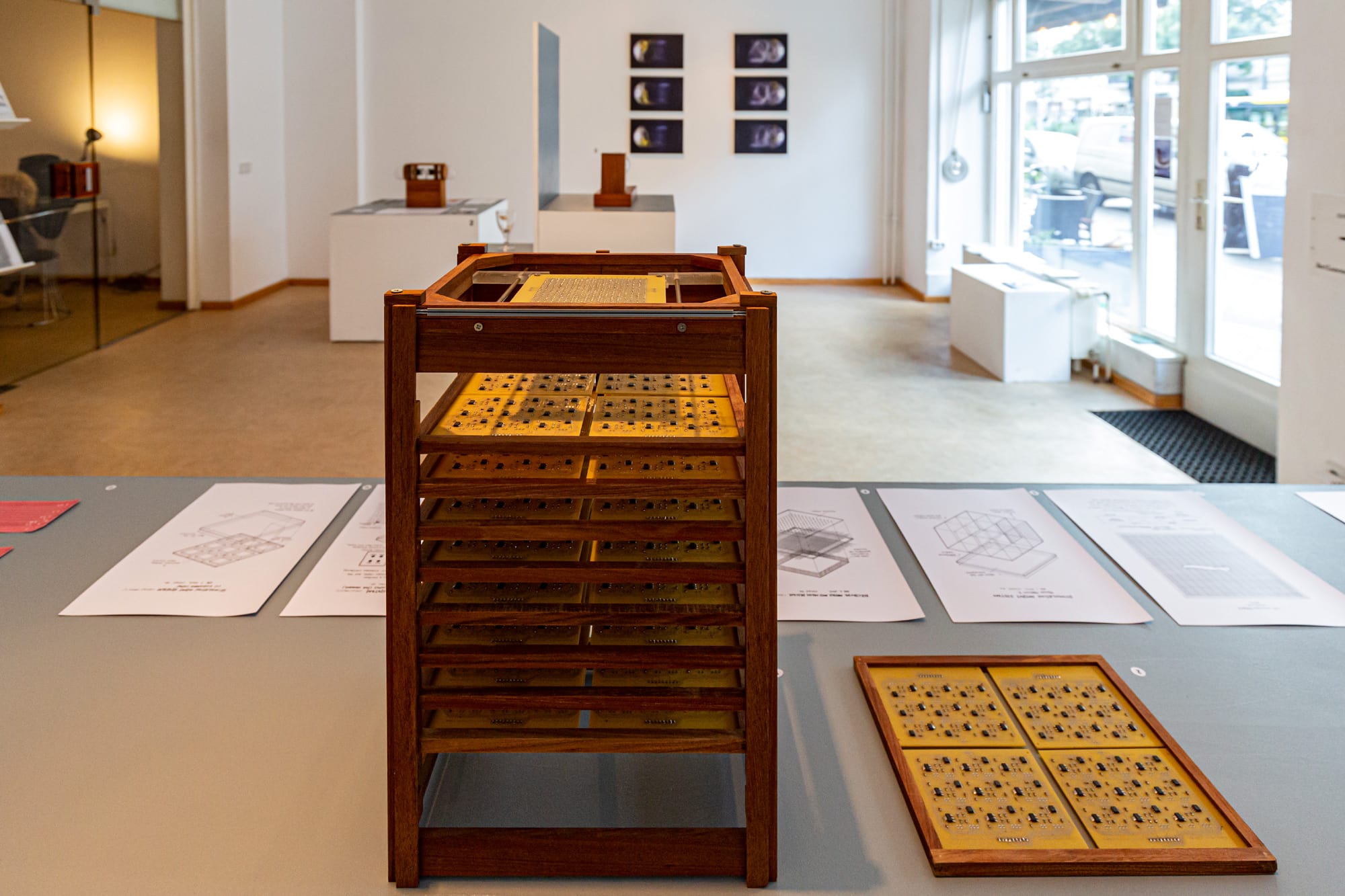 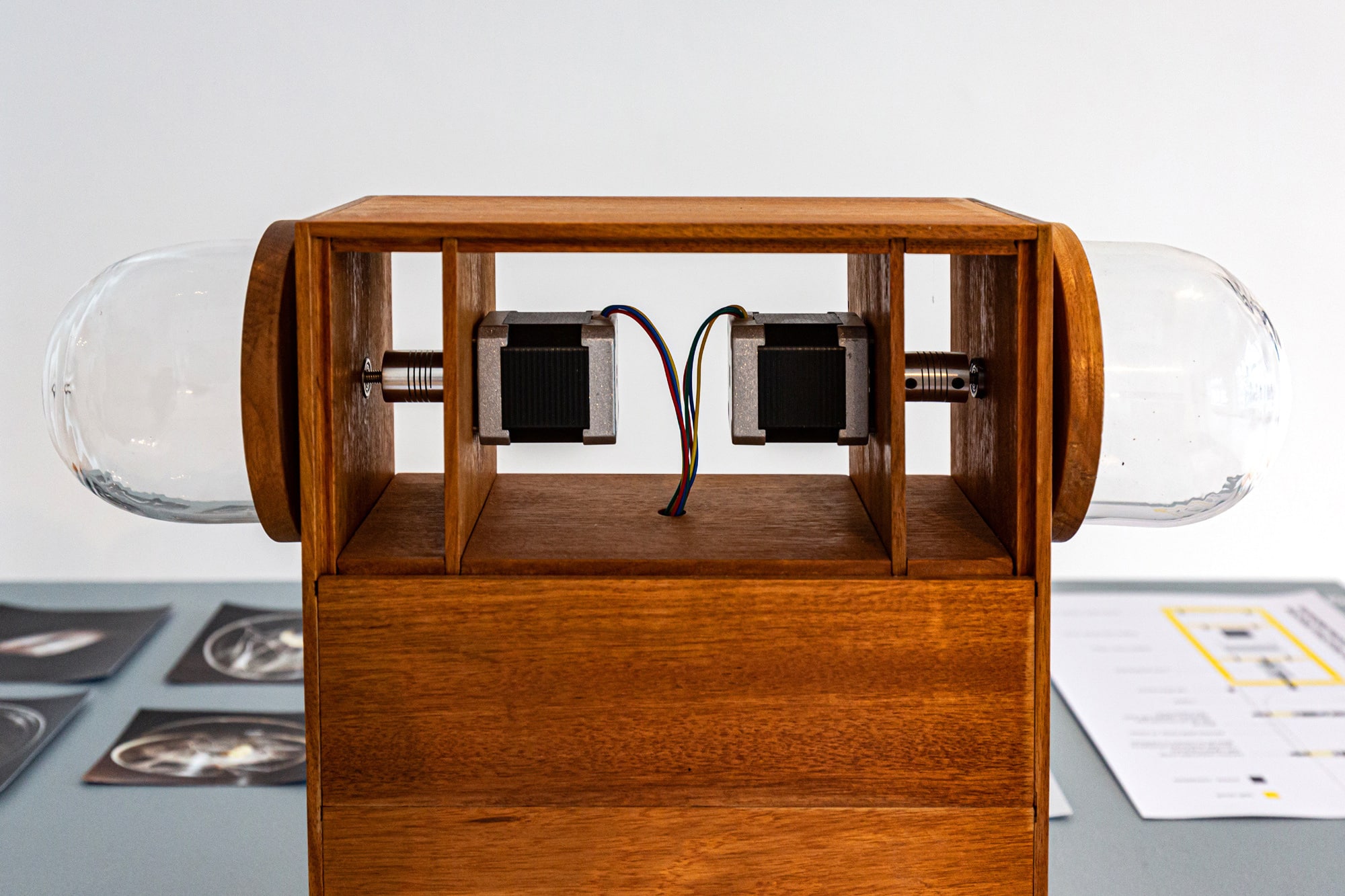 The Silkworm Project is the first of an ongoing series titled The Insect Trilogy, in which she examines the behaviour of silkworms, ants and bees in order to take this into account in the design of machines. Combining the 5000 year-old tradition of sericulture with new technologies, Vivian Xu’s work investigates the role of human and nonhuman, biological and technological, and the permeable borders between them. Her silk machines are based on a closed feedback loop that creates an autonomous production system that is both organic and artificial, biological and computational.

Vivian Xu’s first silkworm machine, Silkworm Machine I: Flat Spinning, refers directly to the entangled histories of textile weaving and computing. The machine is a stack of square shelves, based in part on traditional Chinese sericulture, but it also resembles the stack of a magnetic core memory unit. Both refer to the very human tradition of imposing Cartesian structures in the world. In her Silkworm Machine II: Spatial Spinning, Xu decided to design a machine around the organism, integrating the biological and sensory into the mechanical. The artist is interested in “presenting the spatial perspective of the worm through the machine design, to try and probe into inner workings of the silkworm’s worldview.” Silk spinning equals insect architecture – building a space in which the silkworm can safely pupate.

The most recent prototype of The Silkworm Project, Machine III – Magnetic Spinning Machine, financially supported by Art Laboratory Berlin, merges machines I and II. It stresses a hybrid bionic perspective that is speculative in its nature. On one level it tries to think about how we design systems and machines. Almost resembling a space capsule – elliptical and planetary – as if rotating in its own little orbit. Neither fully machine-like, nor purely biological; it is a hybrid. The machine aims to disrupt the insect’s equilibrium, introduce confusion, and track the silkworm’s perceptual blind spot through the spun silk structures. Like Machine II this machine uses curved surfaces to challenge the silkworm, which usually uses corners and angles to anchor its structures. Vivian Xu’s Silkworm Project posits a posthuman question of autonomous biofabrication: How can creatures and machines function together to weave new biomaterials? Xu noticed recently: “I am interested in speculating on a new bionic system logic, where worm and machine form a levitated rotatory ecosystem.” 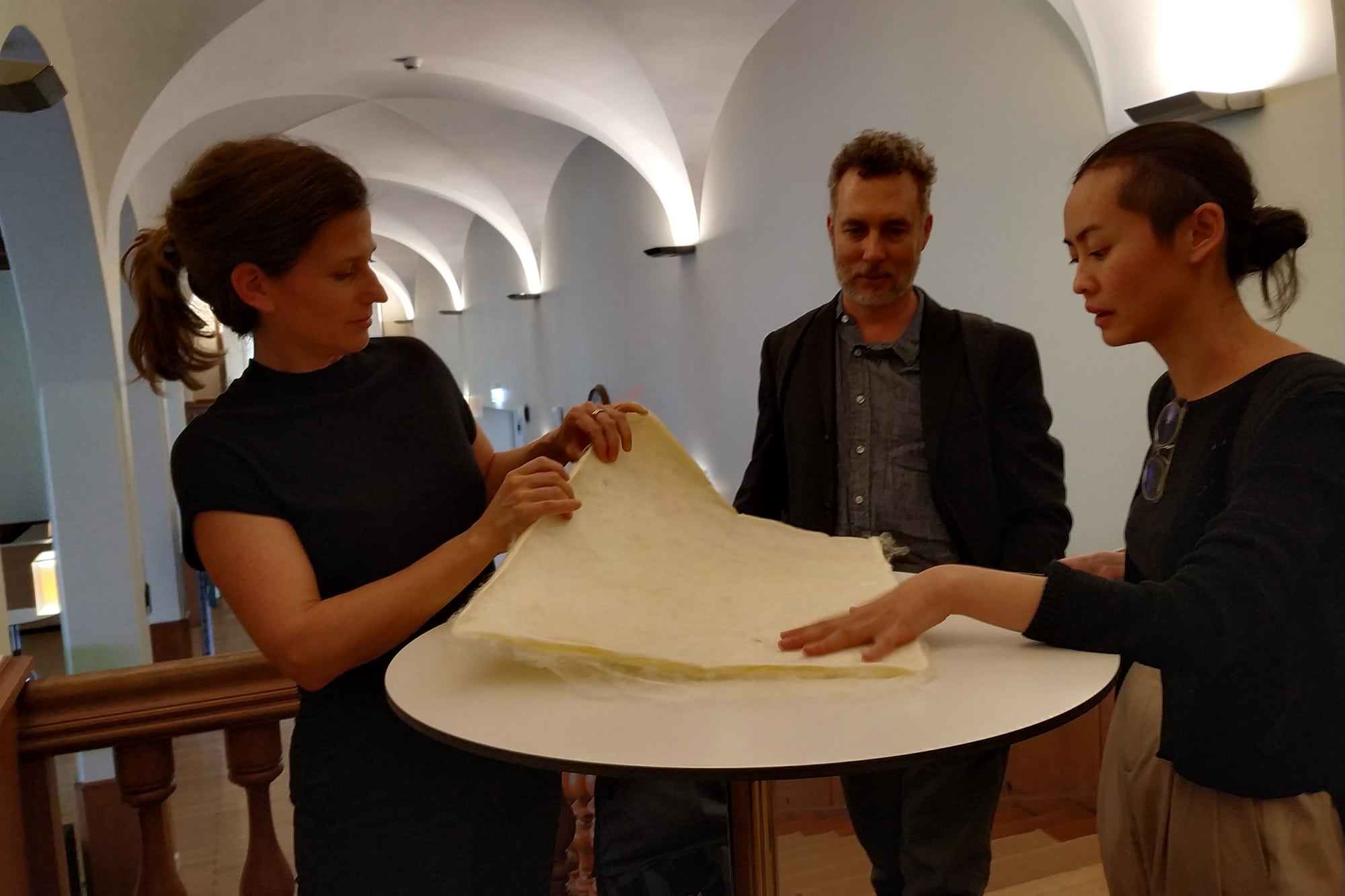 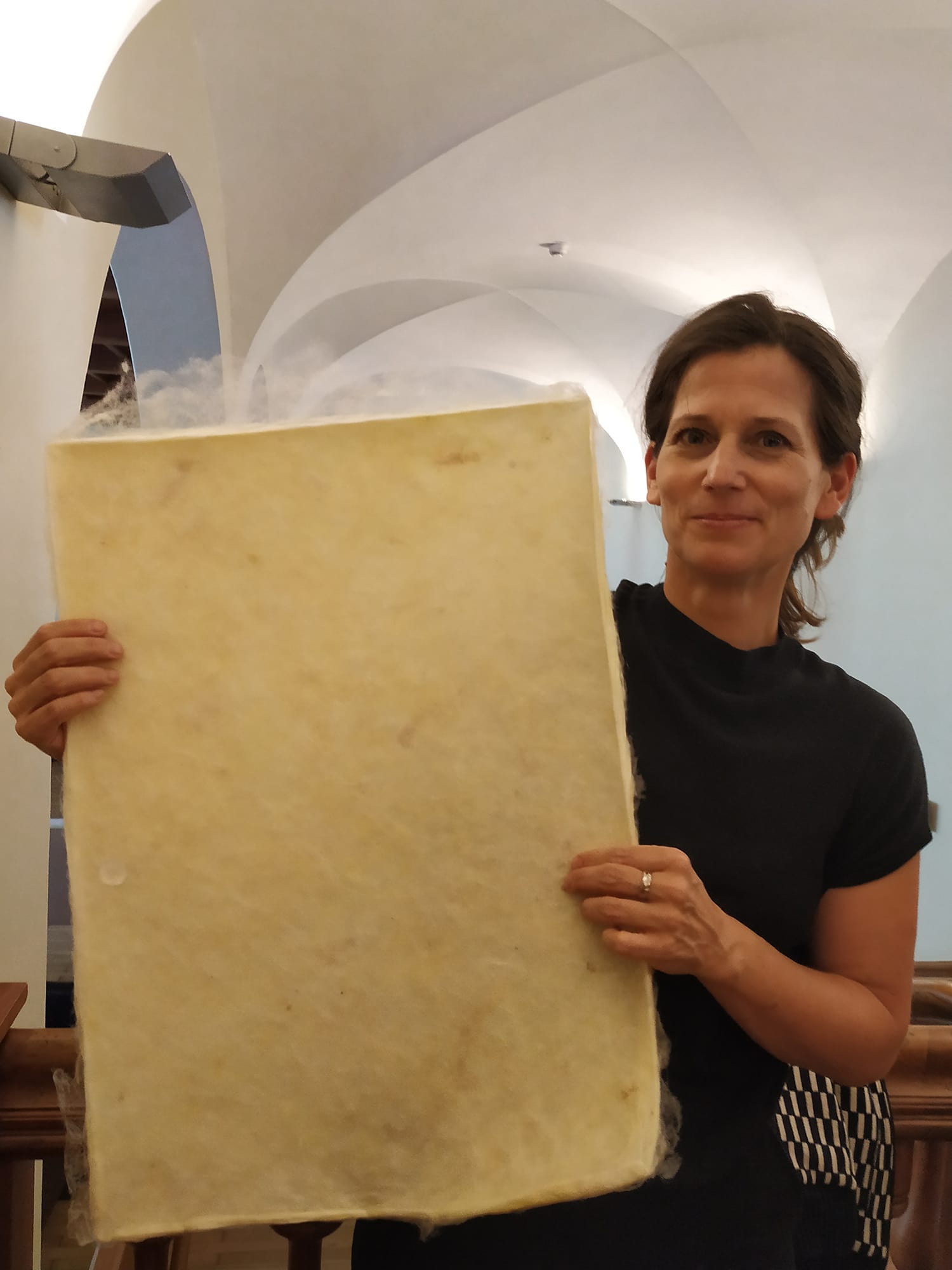 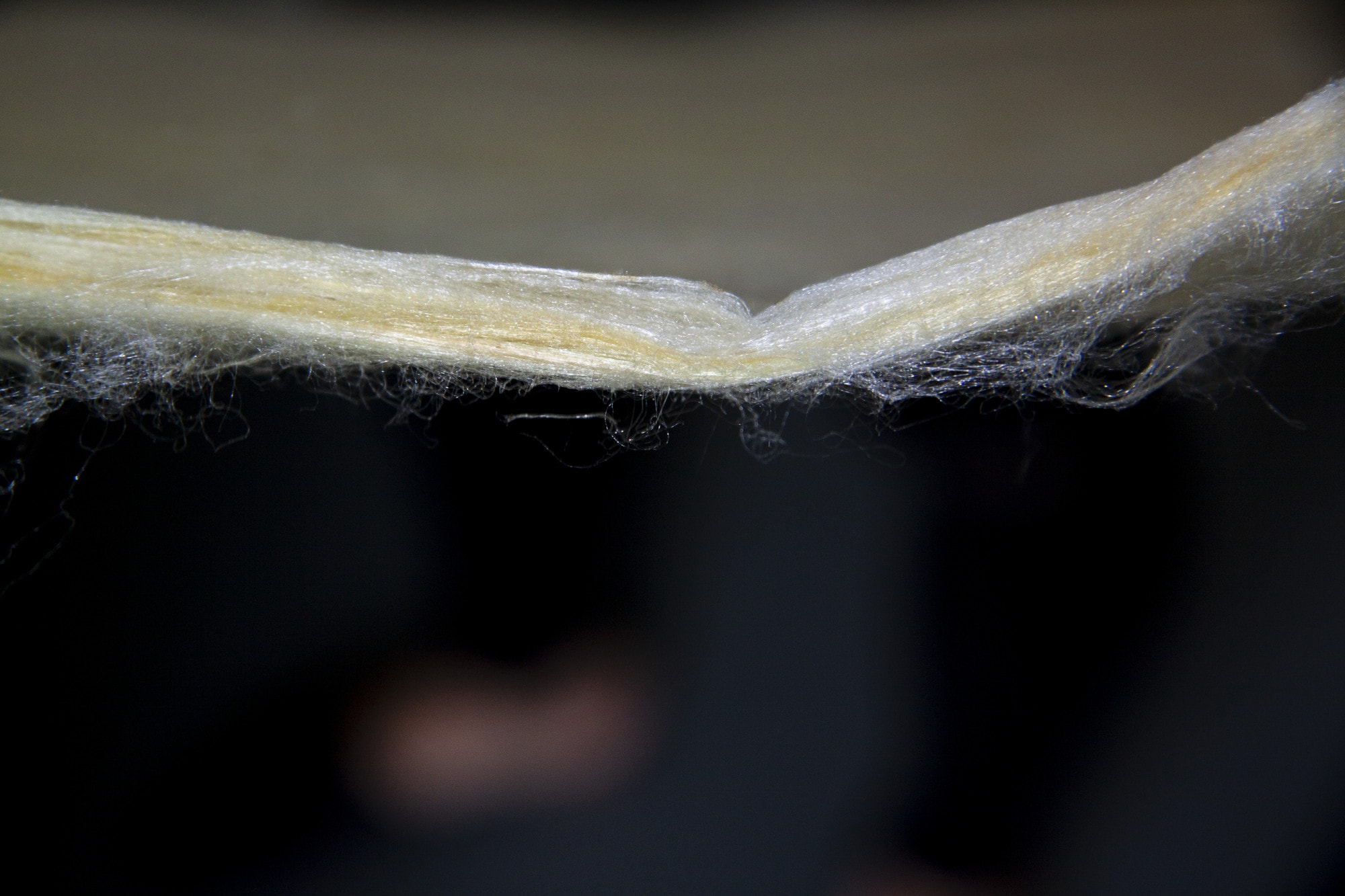 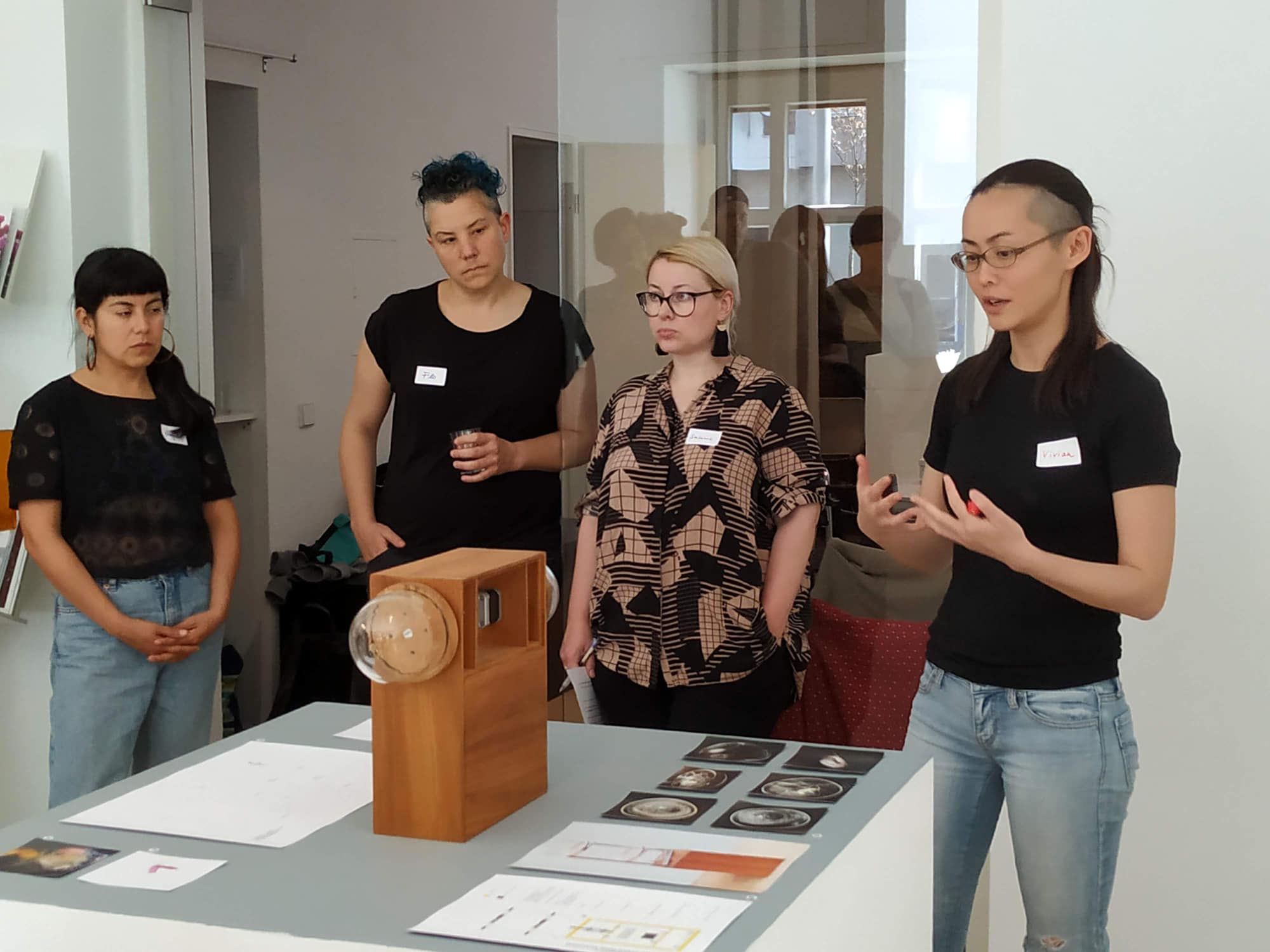 Vivian Xu (b. 1985) is a media artist, designer and researcher from Beijing, currently based in Shanghai. Her work explores the boundaries between bio and electronic media in creating new forms of machine logic, life and sensory systems, and often take the form of object, installation and/or wearable. She has shown, lectured, and performed at various institutions in China, the US, Germany, and Australia, including the National Art Museum of China (Beijing), the Central Academy of Fine Art (Beijing), the China Academy of Art (Hangzhou), the Chronus Art Center (Shanghai), the Rockbund Museum (Shanghai), the Shanghai Symphony Orchestra (Shanghai), the New York Science Museum (New York), Gallery Ho (New York), Art Laboratory Berlin (Berlin), SymbioticA at University of Western Australia (Perth), and currently at the Max Planck Institute for the History of Science (Berlin). Vivian co-founded Dogma Lab, a trans-disciplinary design lab in Shanghai, that is dedicated to creating experimental research at the intersection of design, technology, art and science. Between 2013-2015, she was Research Fellow at New York University Shanghai. Since then, she has lectured at various universities and programs, including Shanghai Tech University, Chinese University of Hong Kong Shenzhen Campus, Roy Ascott Technoetic Arts program (Shanghai), etc. Her work has been featured in media and press, including VICE China, Elle US, and the China Global TV English Channel, etc. Xu received her MFA in Design and Technology at Parsons the New School for Design in 2013.

Max Planck-Institute for the History of Science, Berlin (MPIWG)

Max Planck-Institute for the History of Science, Berlin (MPIWG)

The exhibition presents the complex project The Silkworm Project by artist and designer Vivian Xu with multiple prototypes and documentation of previous experiments as well as a new machine interacting with live silkworms. The Silkworm Project is the first of an ongoing series titled The Insect Trilogy, in which she examines the behaviour of silkworms, ants and bees in order to take this into account in the design of machines. Combining the 5000 year-old tradition of sericulture with new technologies, Vivian Xu’s work investigates the role of human and nonhuman, biological and technological, and the permeable borders between them.

Art Laboratory Berlin is glad to present Xu’s projects for the first time in Europe.

This one-day symposium, organised by Lisa Onaga of the Max Planck Intitute for the History of Science in collaboration with Art Laboratory Berlin, discusses how the lens of contemporary art can engage with the genre of the agricultural treatises and manuals that have long attracted the attention of scholars in the history of science. Interrogating how art situated at the animal-machine interface can contribute to the analysis of knowledge production presented in treatises involving animals of particular utility or value.

The symposium raises questions about how to depict and communicate three-dimensional and tactile prototypes and models involving living things into two-dimensional spaces. The symposium participants will discuss how to productively open up the conventions of treatises to new artistic interpretation, while simultaneously analyzing them for what they may indicate about the time and the fabric of their respective societies.

Conversations in Silk presents a dialogue between historian of biology Lisa Onaga, Senior Research Scholar at the Max Planck Institute for the History of Science, and artist and designer Vivian Xu. They will reflect on the complex and intermingled topic of silk, spanning from the historical and cross-continental context of sericulture, to specultations of the future of the silkworm-human relations within a technoscience framework.

Lisa Onaga will draw from her own research inquiries into the histories of silk cocoon production and standardization in Japan, and silkworm heredity experiments spanning various continents, introducing to audiences new research from her upcoming book Cocoon Cultures. Vivian Xu will speak of her work and research for The Silkworm Project, which takes on a more speculative and cybernetic view.

The artist presents her research and work for the past six years designing computational and machine environments for the silkworm in pursuit of better understanding the insect’s spinning behaviour and spatial perception. The talk details three perspectives taken during the research process of The Silkworm Project. Vivian Xu  is also speaking about her current work at the Max Planck Institute for the History of Science.

Participants are each given silkworms, hand-reared by the artist in Berlin. Following in the footsteps of other researchers such as the Mediated Matter Group at MIT Media Lab, individuals are able to conduct their own spinning observations, posing spatial questions to the animals by constructing three-dimensional environments for their silkworms to live and work within.