The concurrent exhibition project Nonhuman Subjectivities: Aural Aquatic Presence by Robertina Šebjanič artistically explores the interplay and intercommunication between animal and machine while focusing on the aquatic environment. Especially important here is Šebjanič’s current project Subaquatic / Aquatocene sound scape from 2016, which investigates the phenomenon of underwater noise pollution created by humankind in the seas and oceans. Over the last few years Šebjanic has produced a number of recordings using hydrophones. From this archive she presents a sound work in the exhibition, which explores the phenomenon of human sound pollution. Underwater noise effects a great number of marine life forms, who depend on the subaquatic sonic environment to survive.

In this seminar we want to invite you to theoretically explore these and other aspects about artistic and scientific methodologies on interspecies empathy and human-nonhuman companionship.

Based on the concept and exhibition series Nonhuman Subjectivities the presentation will theoretically reflect several artists and their specific artistic interest in nonhuman agents. Different artistic strategies will be presented to discuss the manifold aesthetic approaches to the phenomenon of object-oriented perception. Be it narrative strategies, aesthetic strategies of immersion, bridging medical historical phenomena with gender issues, or combining scientific laboratory and art practices – it is challenging to explore a variety of artistic approaches towards the nonhuman. The counter-linguistic turn as well as the concept of cooperative actions can serve as a useful theoretical ground within the debate.

Berlin based art historian Regine Rapp curates and researches contemporary art at the intersection of art & science, and the phenomenon of art & space. She co-founded Art Laboratory Berlin in 2006, which she co-directs and curates together with Christian de Lutz since 2009. Exhibition and research topics: Time & Technology, Synaesthesia, macro/microbiologies and the arts. Recent publication: Art and the Biological Sublime in the 21st Century (2015).

The most substantial aims of the audiovisual performance Aurelia 1+Hz / proto viva sonification (2015) are to explore the phenomena of interspecies communication, sonification of the environment and the underwater acoustic/ bioacoustics. Her new installation Subaquatic / Aquato-cene sound scape (2016) reflects about the immersion into the underwater acoustic environment and the sound and noise pollution produced there by human presence. The project explores the relationship between sound, nature and society and encourages rethinking the human impact on the (under)water habitat as well as the establishment and maintainance of safe audio environ-ments for animals that live in the oceans and seas.

Ljubljana based Robertina Šebjanič is an intermedia artist whose works address the relationships between art, science and technology. In recent years, she’s been focusing on living systems in particular. Her artistic exploratory processes result in audiovisual performances and sound art, as well as complex submersible configurations/ installations. http://robertina.net/

We have a lot in common with coral. It builds shelter to protect itself, and lives in symbiosis with microorganisms, which – like our microbiome – help it to survive. Coral acts like a steward to much other marine life, providing a home for the algae with which it lives symbiotically, and creating reefs that are one of the most biodiverse ecosystems on the planet. Using stewardship as a common starting point, Kat will discuss her piece The Coral Empathy Device (2016) in the context of exploring interspecies empathy through artistic investigations into the marine environment and human perception. Drawing on an approach that melds together multiple knowledges, Kat will explain both the conceptual approach and her methodologies in the research and creation of a piece that challenges the audience physically to prompt a lived experience connecting human-in-air and coral-in-water.

Kat Austen is a succession of experiences and an assemblage of aspirations. She is also a person. She creates artworks and experiences that explore multiple knowledges, boundaries and authority in an environmental context. She has a studio in Berlin and lectures at University College London’s Arts and Sciences BASc, is Artist in Residence in UCL’s Faculty of Maths and Physical Sciences, and part of the London Creative Network. https://www.katausten.com/

Christian de Lutz, originally from New York and now based in Berlin, is an artist and curator. His artworks deal with social, political and cultural themes, with an emphasis on science, technology, migration and cultural borderlines. He co-founded Art Laboratory Berlin in 2006 and co-directs and curates Art Laboratory Berlin together with Regine Rapp since 2009. Exhibition and research topics of the last years: Time & Technology, Synaesthesia, macro/microbiologies and the arts. Recent publication: Art and the Biological Sublime in the 21st Century (2015). 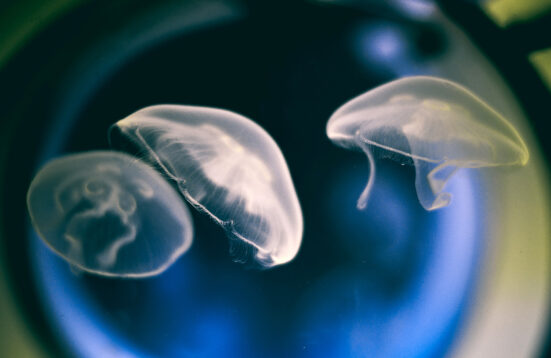 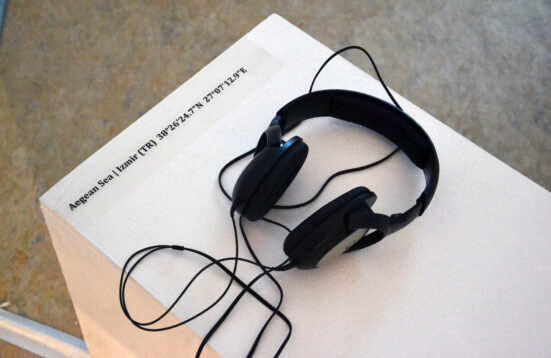 The exhibition offers a dialogue of agency and sentience in one of the ‘simplest’ of multicellular creatures: the jellyfish related to a human made machine. Another project discusses sound in marine systems, as well as the effects of human intervention on aural aquatic systems. 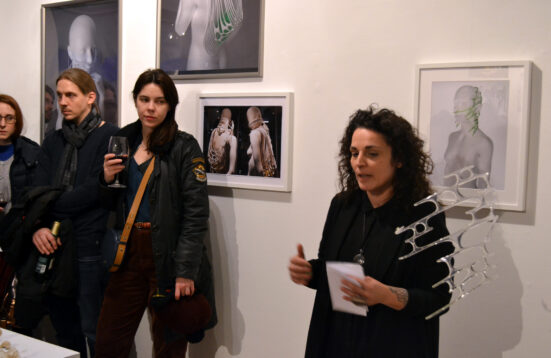 The Matter of the Soul | Symphony by Kat Austen is a performance work that engenders empathy with the consequences of climate change. Aquatocene / The subaquatic quest for serenity by Robertina Šebjanič investigates underwater noise pollution created by humankind in the oceans.