Art Laboratory Berlin is pleased to present an exhibition of works by the artist Susanna Hertrich, which reflect the phenomenon of prostheses as an extension of the human in the 21st century. In the context of the latest technologies as well as current developments in the field of neuroscience and biology, Susanna Hertrich presents new transhuman sensory extensions that are closely linked to the debate on human 2.0.

The exhibited works are part of her long-term artistic research project Bodies & Technology. In Susanna Hertrich’s work a narration is constructed in which the human sensory apparatus is extended through computer controlled prostheses. The results can be understood as crossing the boundaries between artistic hypothesis and technological experimentation. The artworks reflect our current living environments, as well as critically question the social, political and physical consequences of the new technologies utilised in their making. 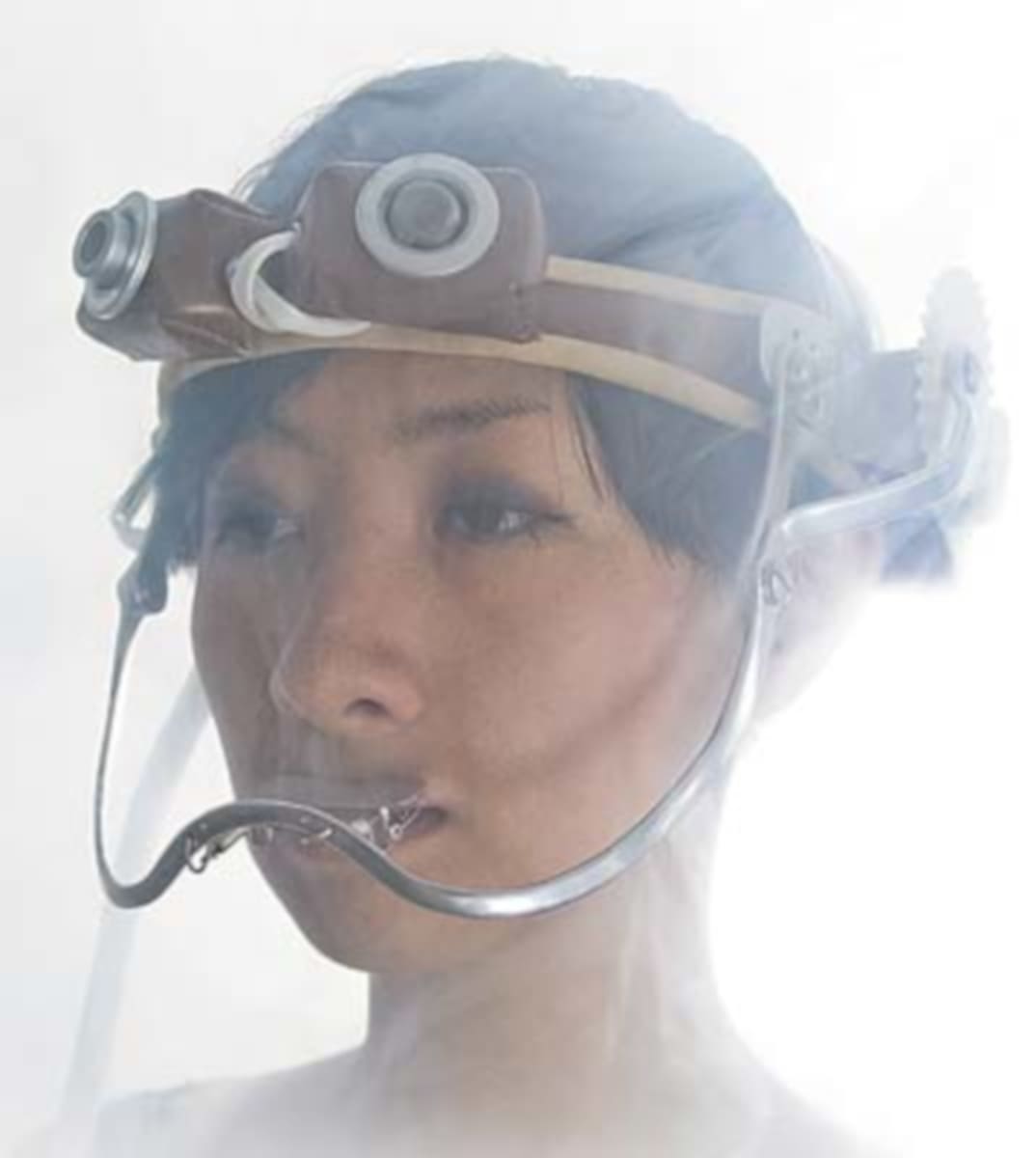 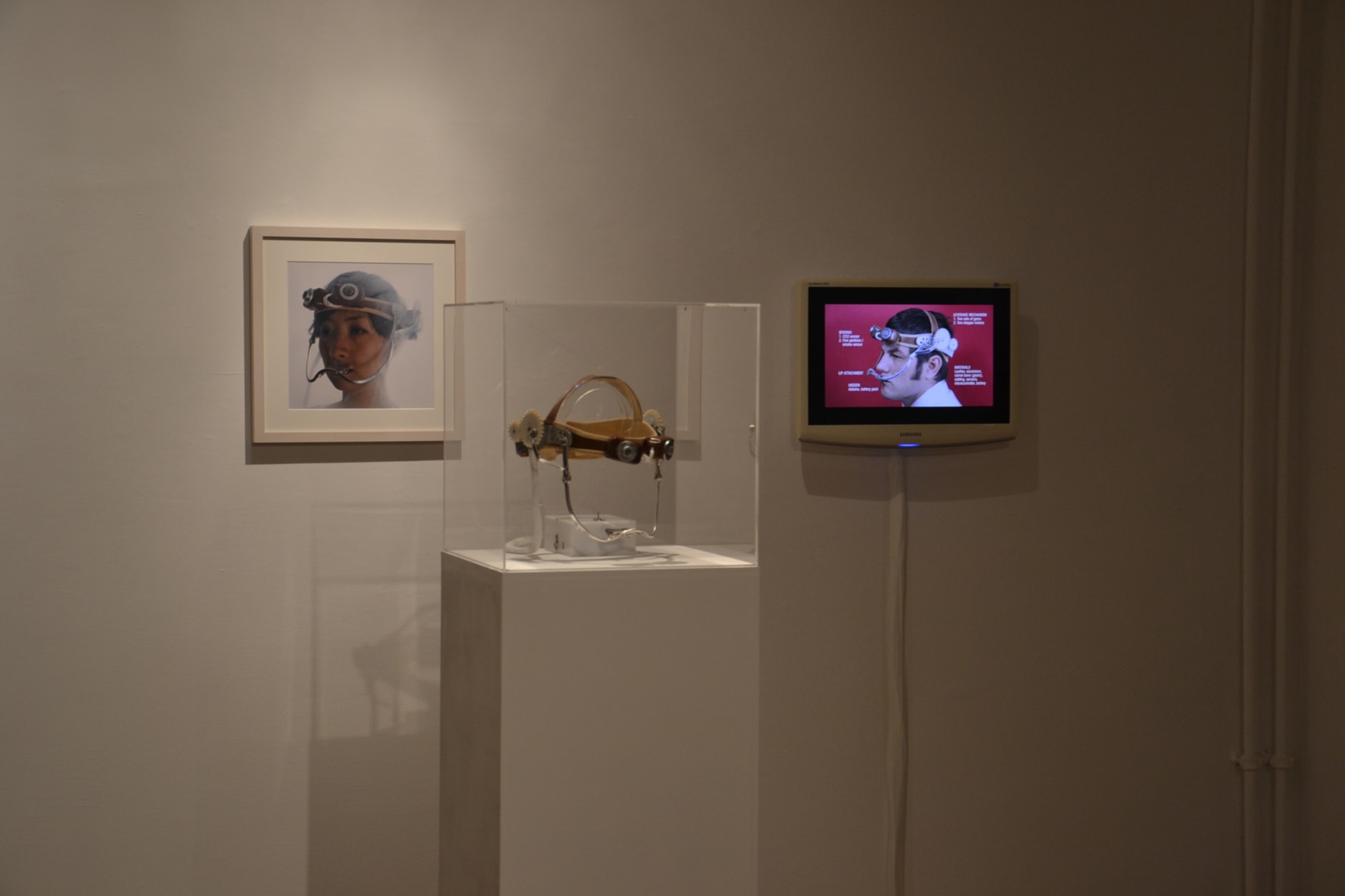 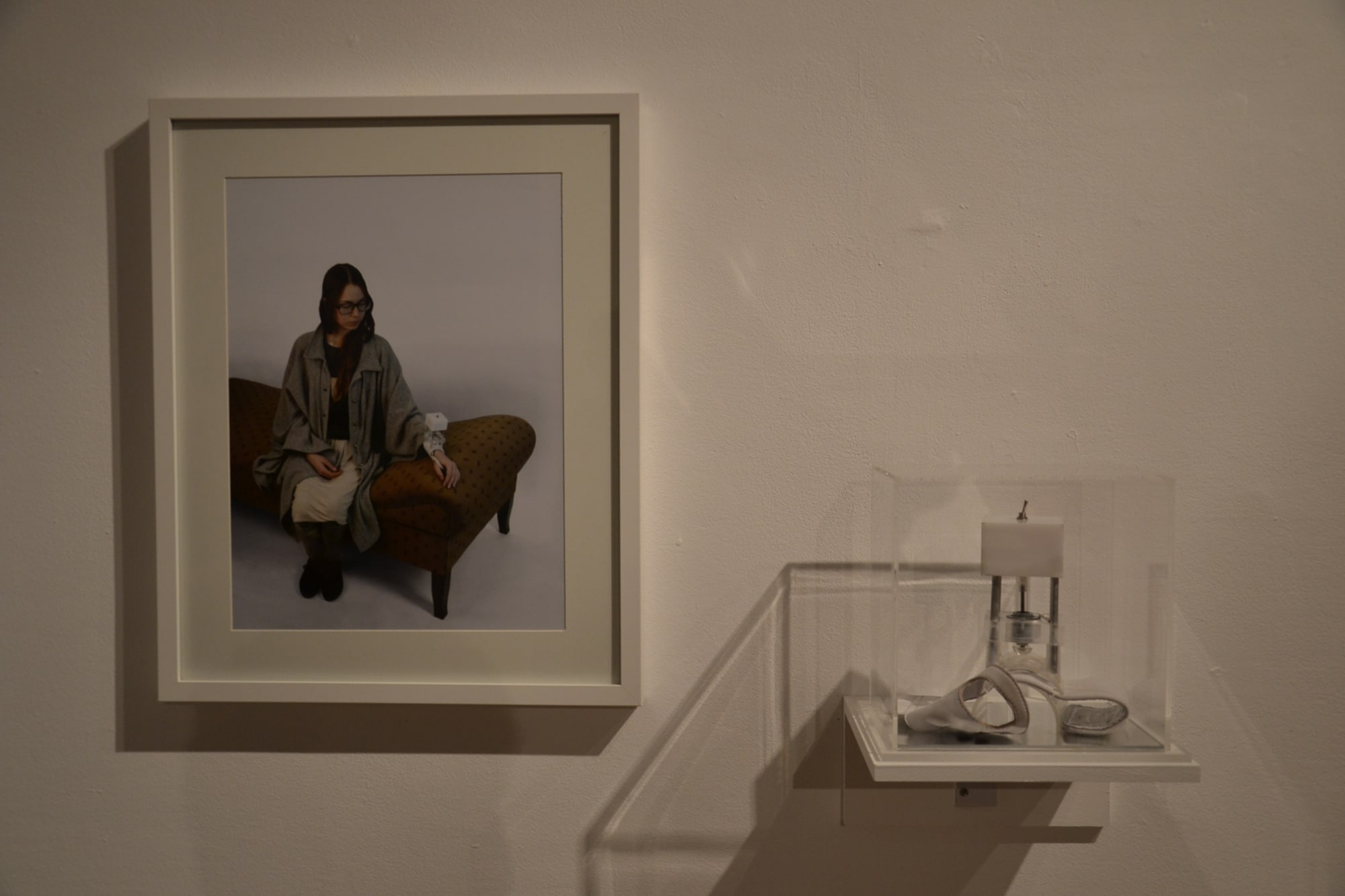 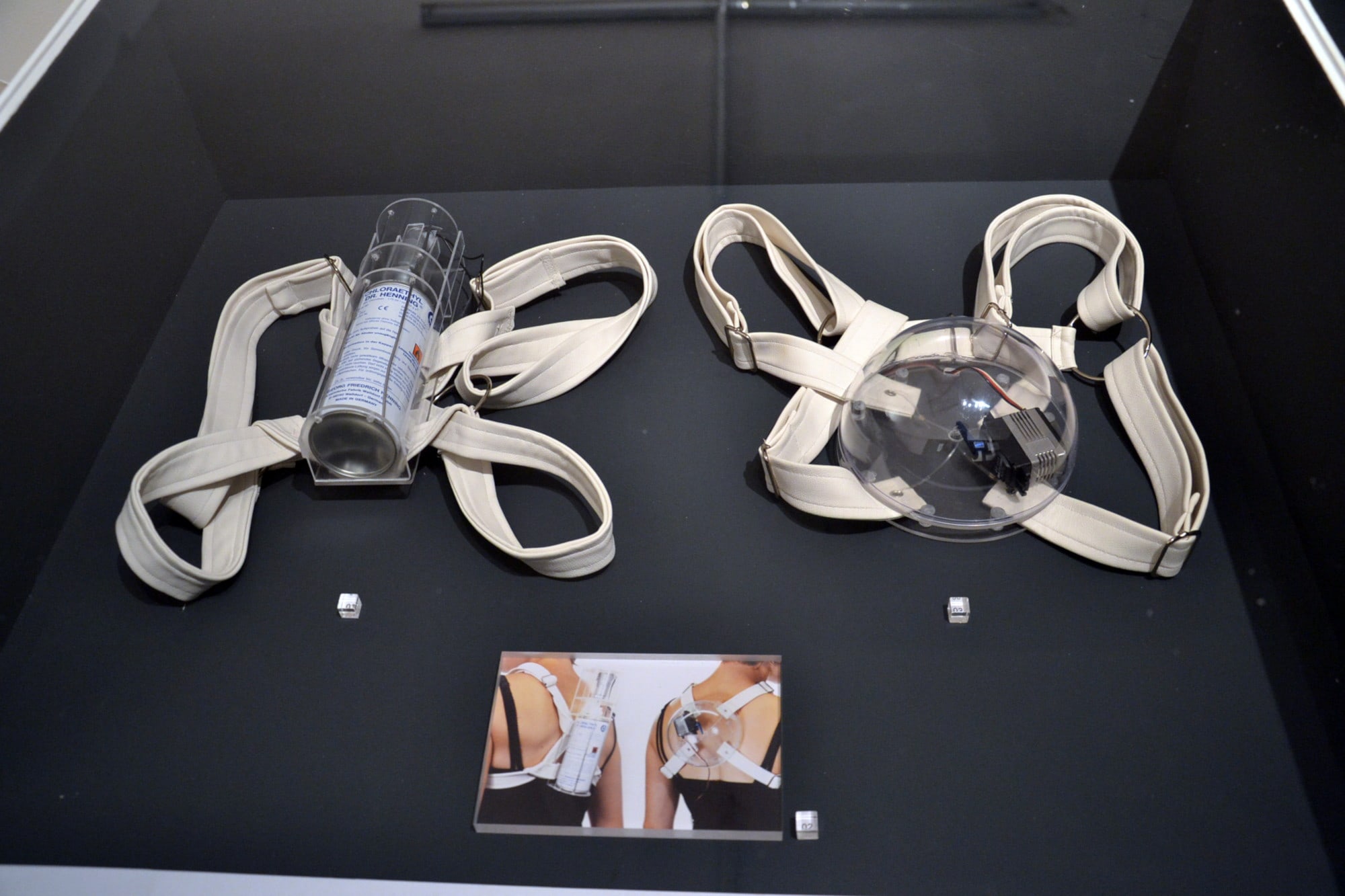 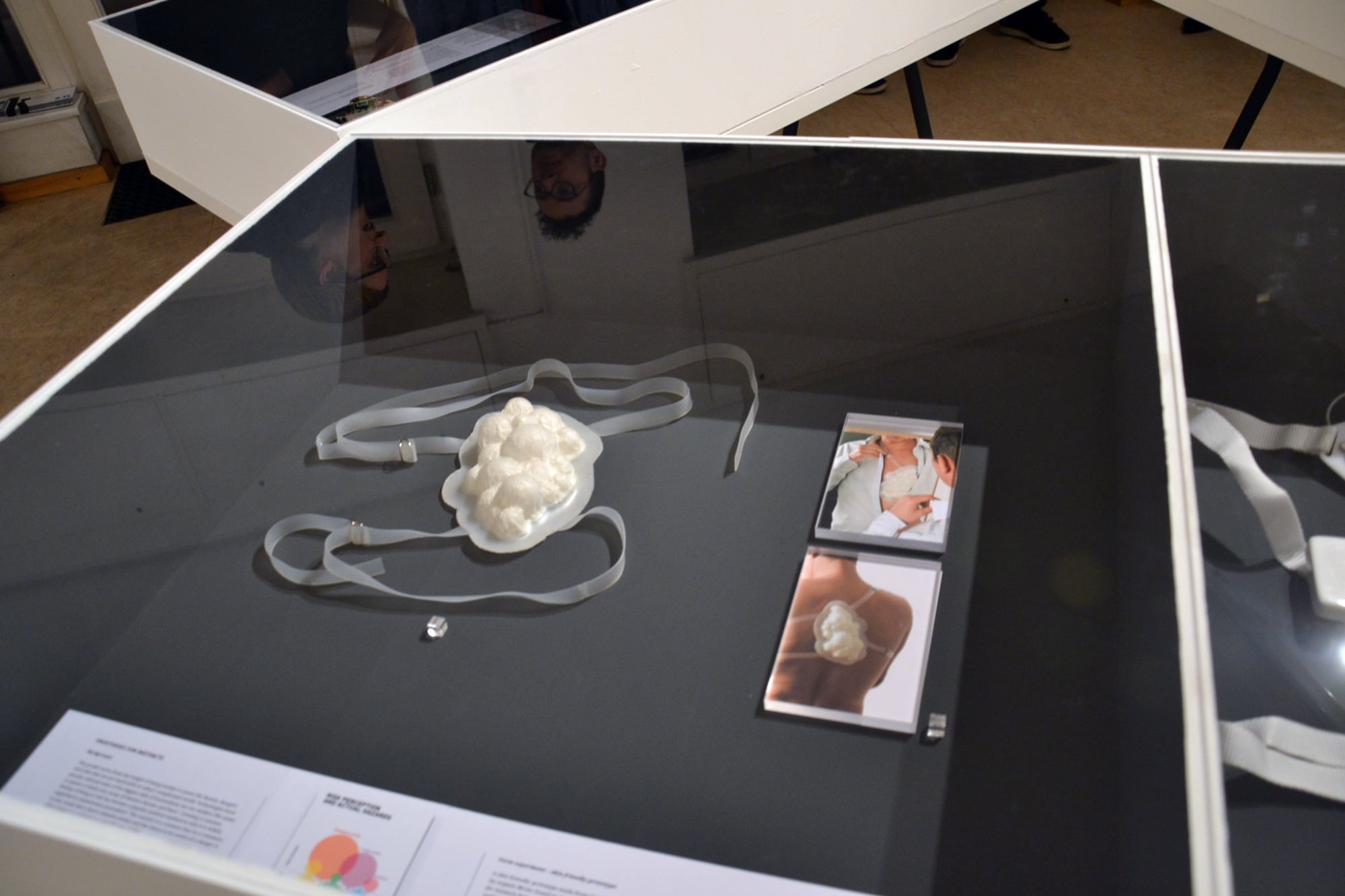 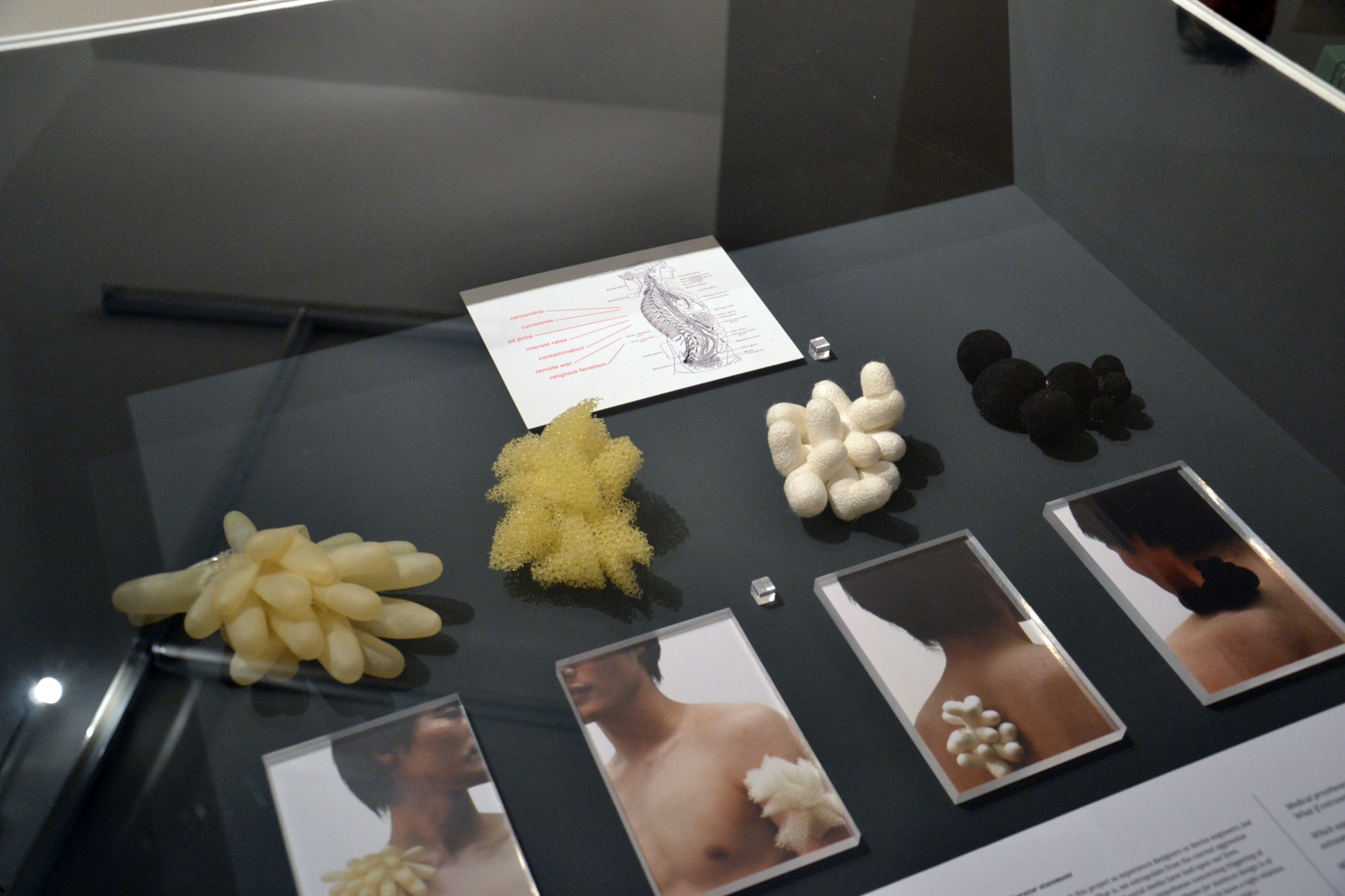 The Jacobson’s Fabulous Olfactometer (JFO), a device worn on the head and face, is a sensorial prosthesis that mimics mammalian „flehmen response“ in reaction to danger. When the device detects a threatening level of pollution the prosthesis curls back the wearer’s top lip, exposing her teeth. Susanna Hertrich developed the project during a research stay at TASML, Tsinghua University, Beijing in 2012, and the work refers directly to the heavy air pollution of the Chinese metropolis (see video). The JFO simultaneously refers to a common, but often invisible 21st century threat. Here the post-anthropocentric gesture is noteworthy – the artist offers people the possibility of adopting a biologically programmed response to danger from elsewhere in the animal kingdom.

In the display cases one can see works from the series Prostheses for Instincts which explores the idea that by augmenting our natural sensory experiences we can widen the range of our perceptions. In doing so Hertrich has created new mechanisms for surviving in a changing world.

The series was, for the most part, created during a research stay at the University of Tokyo from 2009. Within the Meta Perception Research Group, Susanna Hertrich discussed aesthetic, functional and ethical questions with Dr. Carson Reynolds († 2014) and Dr. Alvaro Cassinelli: What if we had devices that induced emotions in a manner similar to instincts, but triggered by non-tangible stimuli? What if we used machines to act as prostheses for instincts we have not yet developed?

The work Synthetic Empathy, for example, allows us to express repressed and painful emotions through the use of various prostheses. Different devices enable an empathetic openness in the form of staged states of anxiety, panic or grief. 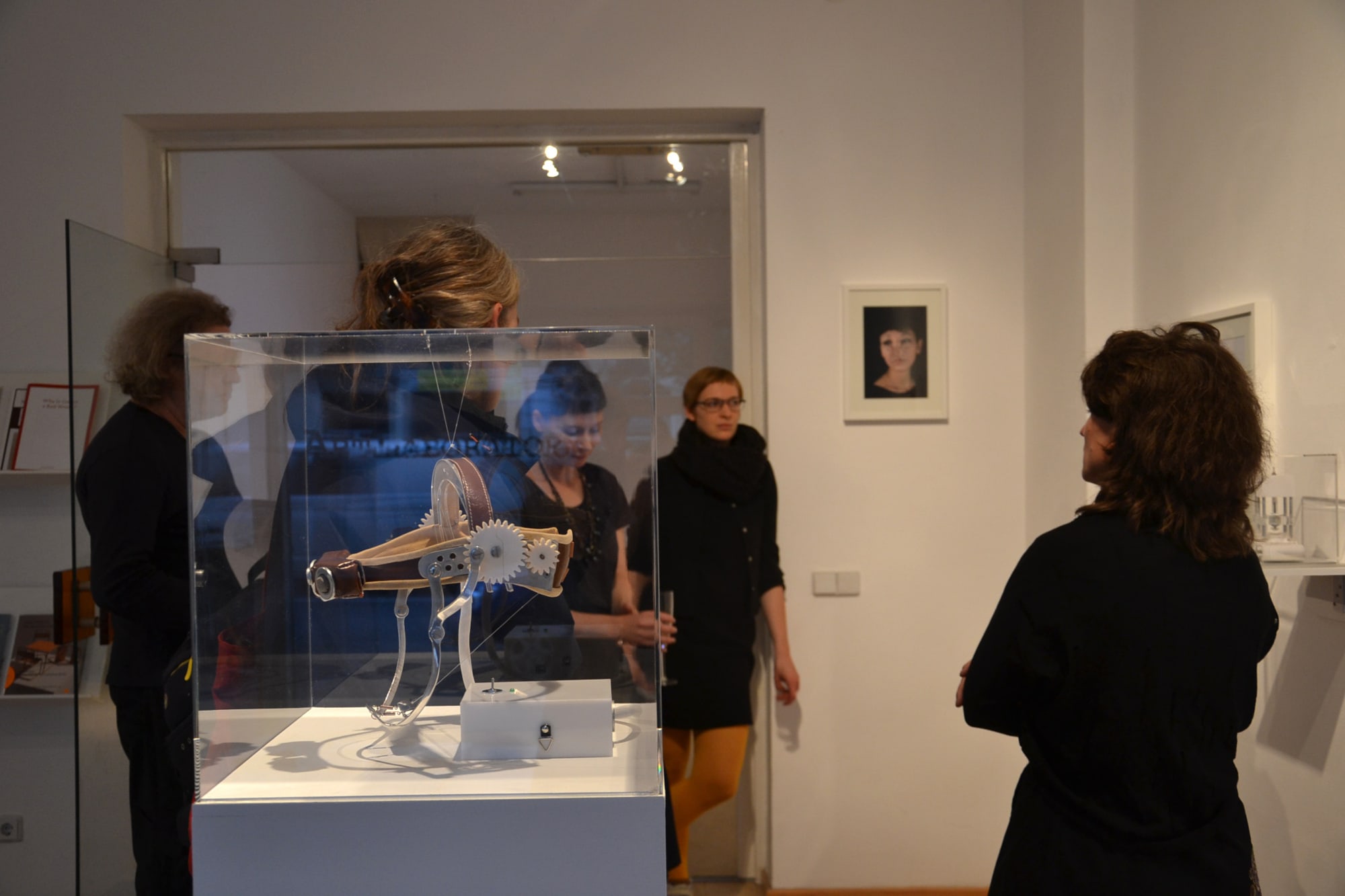 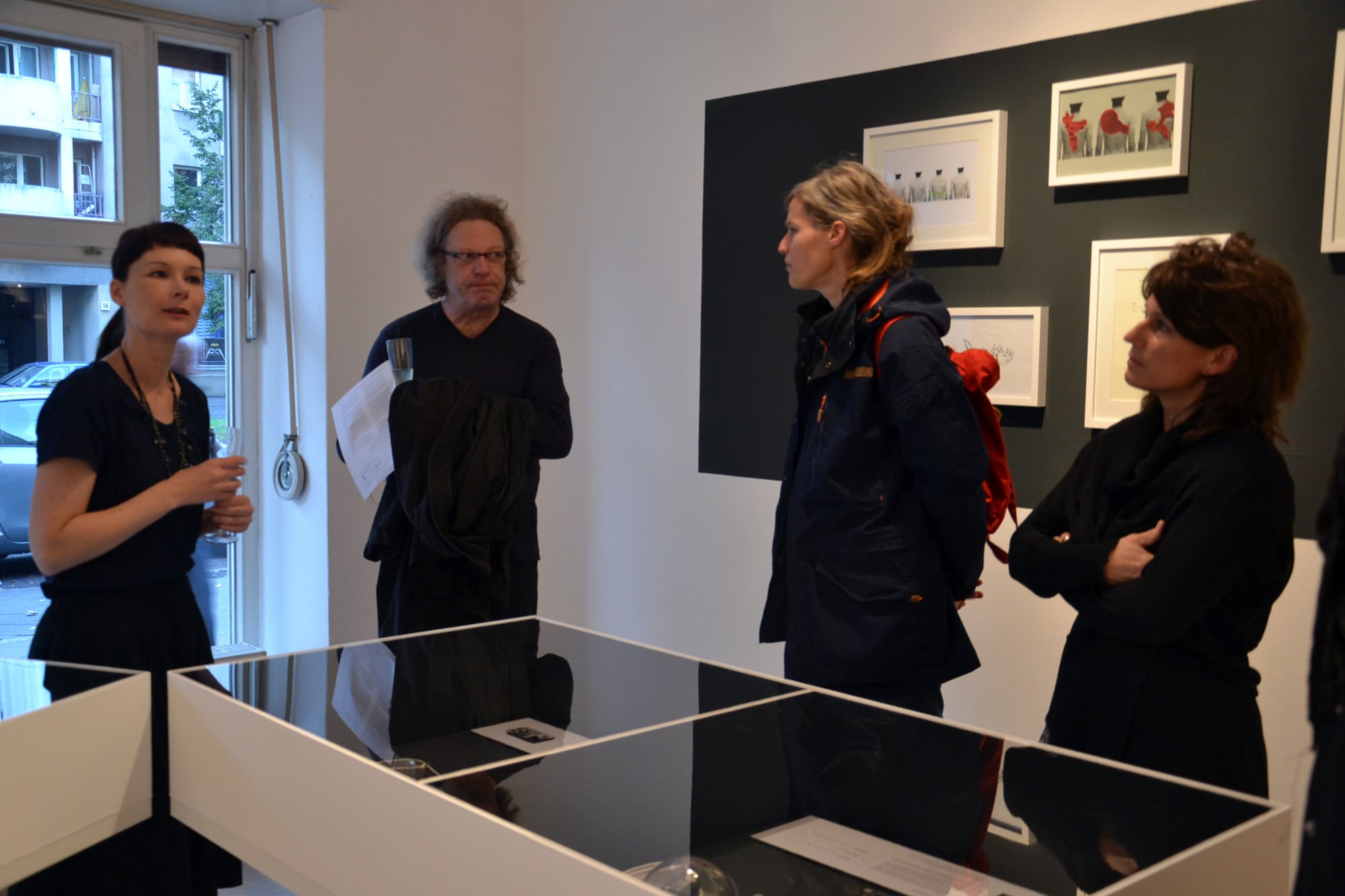 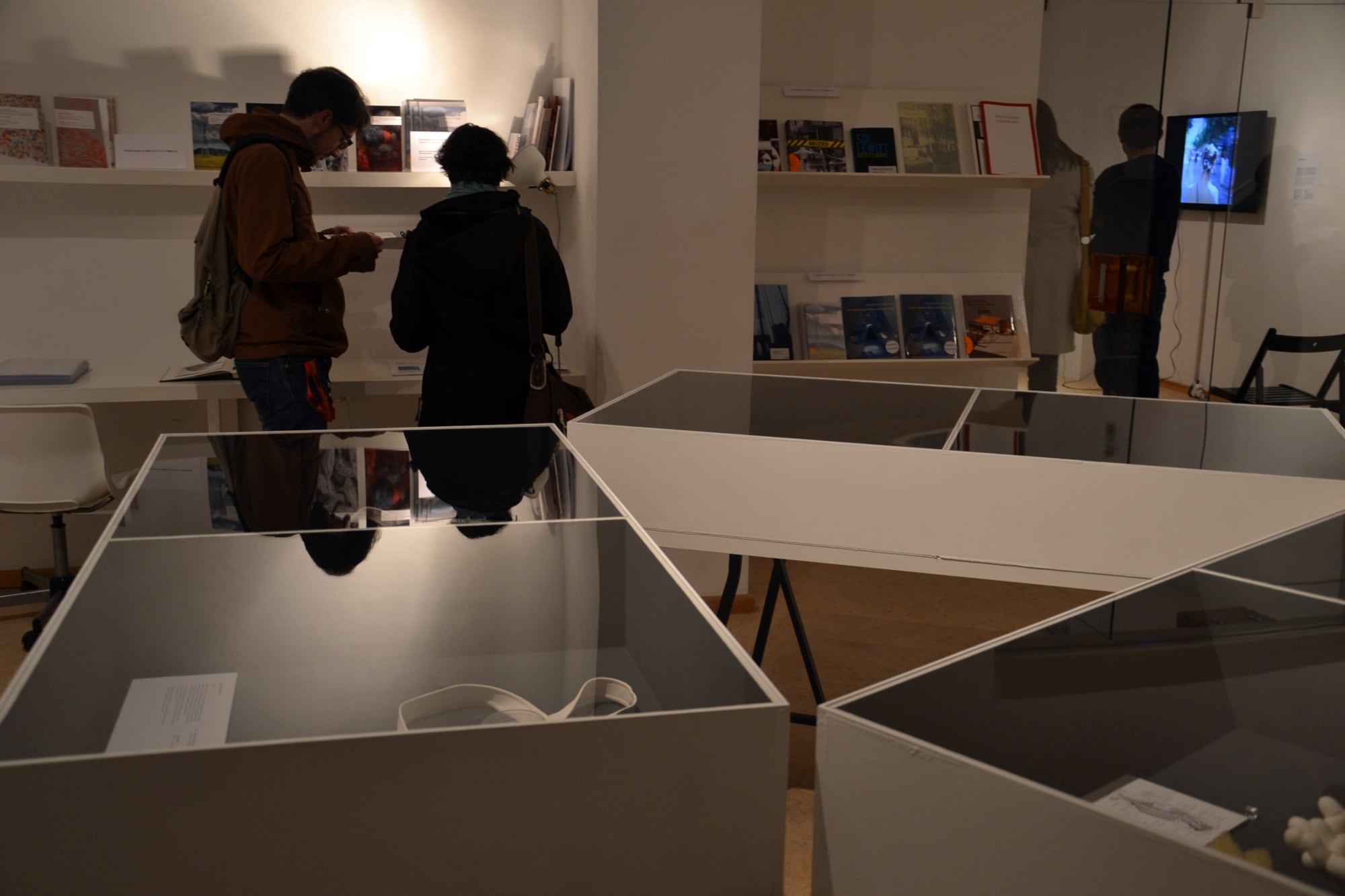 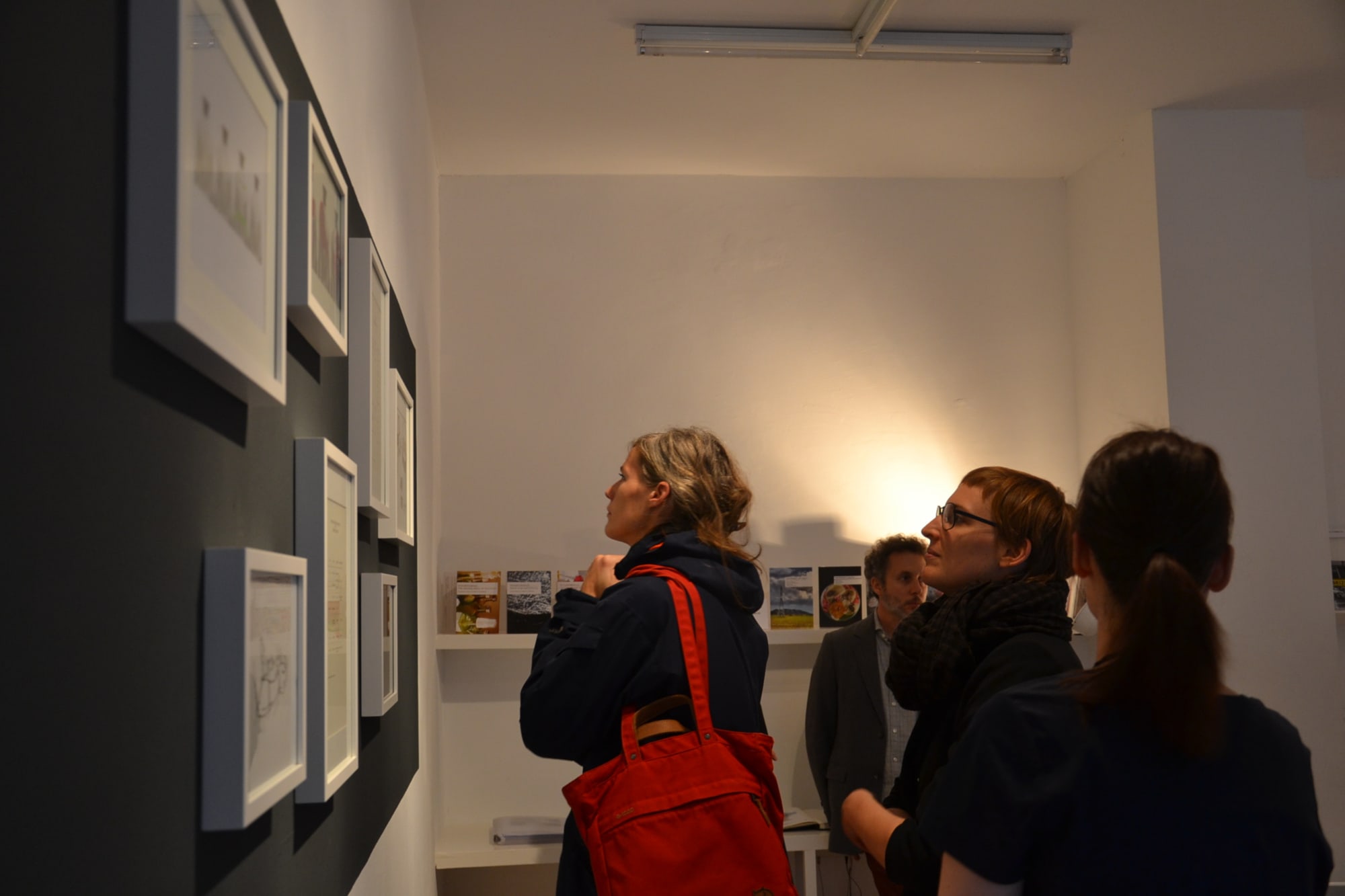 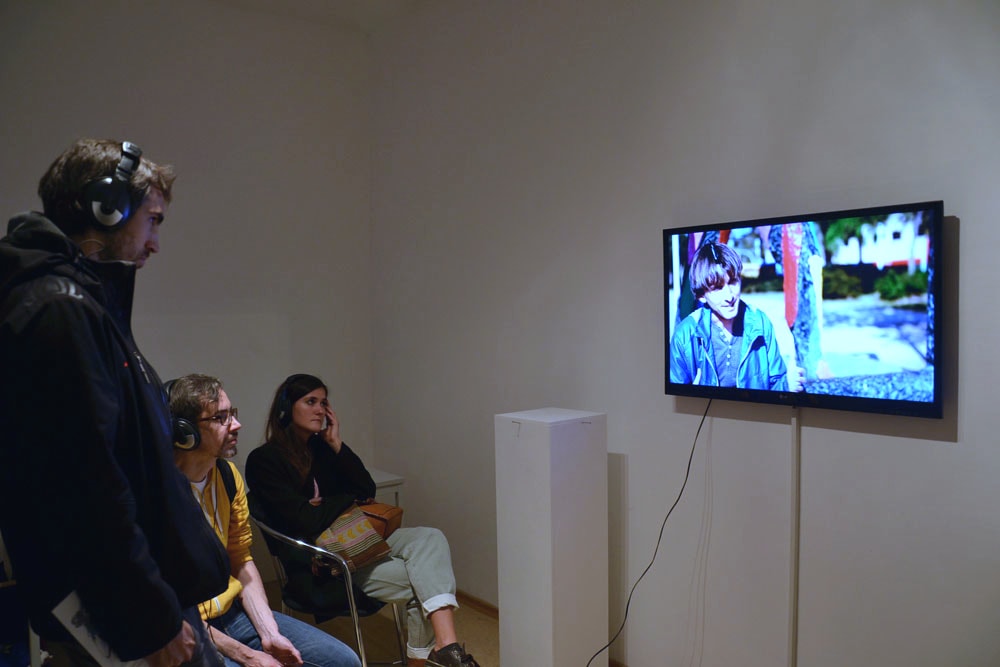 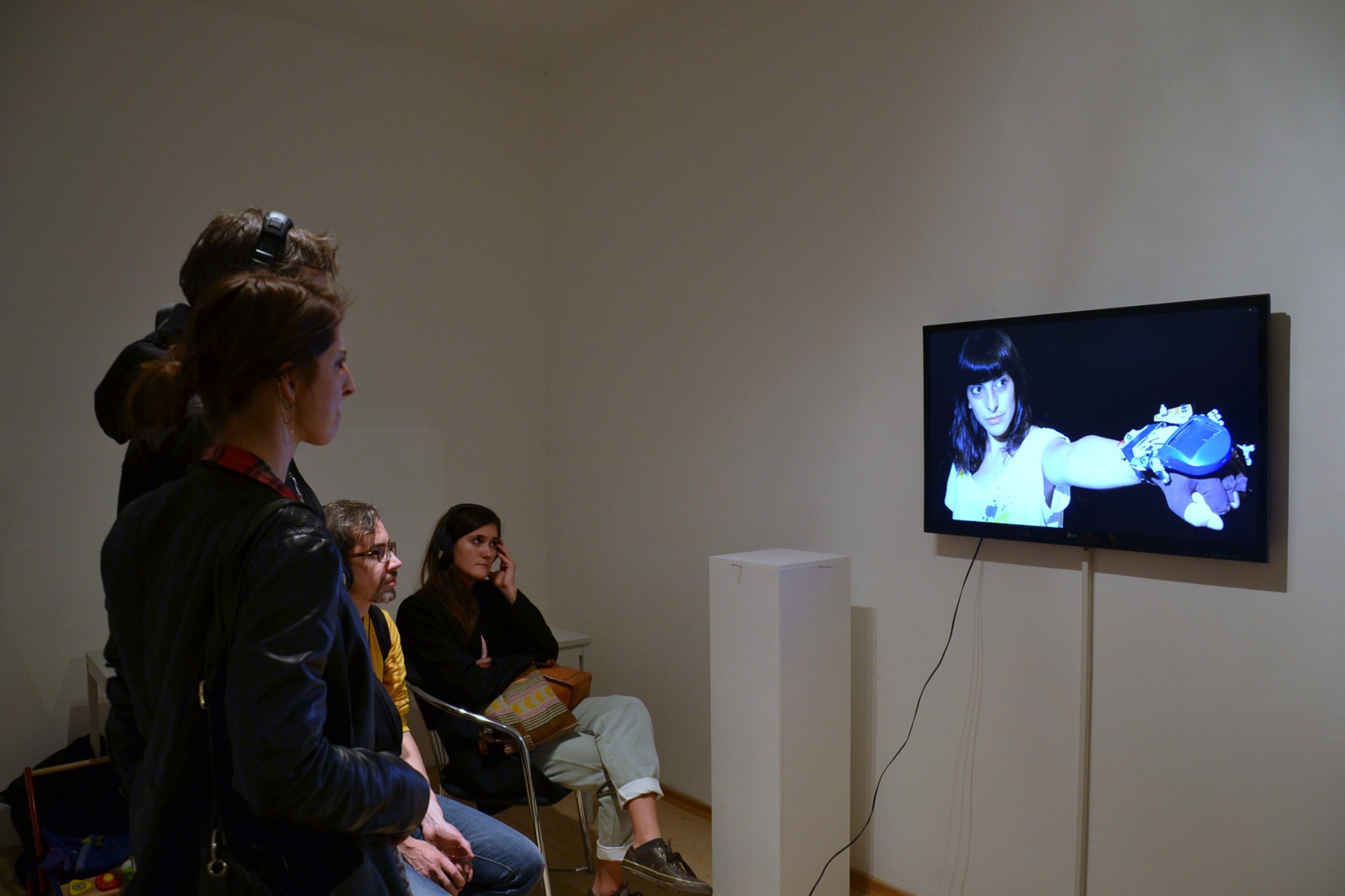 The preparation of the works in the display cases plays with the metaphor of classical scientific exhibition collections and thus generates a tension between a scientifically factual form of presentation and a narrative fictional character, in which the works are staged. As an exhibition within the exhibition, the viewer is faced with a staged museal systematics, which unharnesses the dynamics of speculative design.

The exhibition also contains photographs, drawings and collages that visualise the artistic creation process of the prostheses. The diagrams developed by Hertrich and Reynolds refer to themes of human instincts or artificial fear.

Automatic Anchoring Armour (AAA) is intended as an “instant therapy for nervous people” (Hertrich). The work is an artistic commentary on the debate about Furedi’s ‘cultivation of vulnerability’. Instead of psychotherapy and the associated disclosure of ones own mental vulnerability, the artist suggests a rather more immediate cure through acupressure.

The recently created work Untitled (Nine) marks the beginning of a series in which Susanna Hertrich goes beyond the imitation of animal senses (see the display cases). The portrait shows a young woman with the nose (and complex sense organ) of a star nose mole (Condylura cristata) which lives in North America. By mounting animal sense organs on the human face, Hertrich places the immediate fusion of humans and animals at the centre of debate, touching on a wide range of current discussion, not least ethical.


In order to expand a greater discourse, we are showing in the back room a documentary by Rafel Duran Torrent about the Cyborg Foundation. The focus is on the artist Neil Harbisson, born completely colour blind, who can now hear colours using the “Eyeborg,” and was the first cyborg officially recognized by a State.

abiotech. eu published on 08.01.2016 by Dani Bancroft, BioArt in Berlin: Making Dystopia Beautiful with Prostheses and the Transhuman Life

Hyperallergic.com, published on 22 November, 2015 by Gretta Louw, Prosthetic Devices for the Modern Psyche

Our 2015 programme is made possible in part by a generous gift from Michael Schröder.